I am currently paying around $27 a month for my monitored home security system. And that’s just a system with 3 door sensors, 2 motion, and cellular/battery backup. It’s just a dumb system with no connection to the Internet. I have to be at the one keypad to be able to arm it. 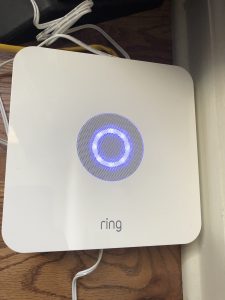 When I learned Ring has a system that would only have a monthly fee of $10/mo or $100/yr, I decided to take a deep look into it. After a couple hours of reading, it seemed like a no-brainer. It would pay for itself within a couple of years. And that would include more sensors, and now I would have the ability to manage it from my phone, while still having a keypad for the less technical family members.

Now, most of you that have read my blog before probably know that I’m not a fan of cloud managed systems. I like to have local control. Mainly because I would rather not have the company go out of business and leave me with a brick. However, considering a security system needs to be centrally monitored, I’m not really sure there’s any way around that. And also, this is owned by Amazon, and it looks like they are pumping money and effort into this product line. I personally don’t think they are going anywhere.

The Ring Alarm comes in a bunch of different bundles. The smallest bundle comes with the base station, a keypad, door sensor, motion sensor, and repeater. Larger bundles include more of the sensors, along with things like flood/freeze sensors, smoke/co alarm listener)it only detects when your dumb amok/co detectors go off), sirens(the base station has one built in), and panic buttons.

The one I got is the 11 piece bundle that includes the base bundle with 4 more door sensors, 1 more motion sensor, and a smoke/CO listener.

Setup of this was simple. They don’t get any bonus points for this, because pretty much every company that does home automation needs to get this right. It should be easy, and it was. The devices in the base bundle were already paired with each other. I just had to install them. You can install the sensors with tape or screws, both of which were included. The addition sensors arrived separate from the base 5 piece bundle, and had to be paired manually, which just took an extra 30 seconds per device. The base station connects via ethernet cable or WiFi, but not both at once. They say it’s for security reasons, but I can’t really think of a reason as to how that’s a security risk. 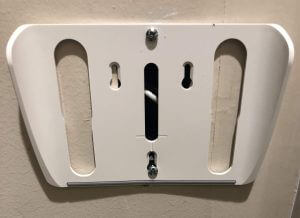 The only thing I had an issue with was the physical installation of the keypad. My current keypad is wired so it’s attached to a single gang electrical box. So this new one has to go in that same spot. But the Ring keypad didn’t have holes for a single gang box. It just had 3 random holes. This wasn’t too big of a deal, because I just put the middle hole on the bottom hole of the electrical box, and then I just took the screw for the other holes and screwed it thorough the plastic of the keypad holder. I feel like that is where they should have put a hole. I doubt I’m the only person installing it this way. 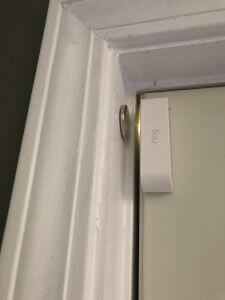 Another small issue I had was our basement door. Because those basement exterior walls are thicker, the door is recessed by a couple of inches. That means I couldn’t put the magnet part of the sensor anywhere on the trim as it was too far away. And putting it on the inside of the trim would cause the door to hit it. Luckily, I had a stack of strong thin magnets that I had bought, and I was able to put that there, and it worked perfectly. Only one side of the magnet triggered it so I had to make sure the correct side was facing the sensor.

The Smoke/CO listener has to be installed close to any smoke alarm in order to trigger. You have to run a test on it before the Base Station will alert the monitoring service. Keep in mind that you will need to put the listening sensor into test mode before you test your Smoke/CO Detectors, otherwise they try to call the primary person on your list and then they dispatch the fire trucks. One cool thing was that it was able to differentiate between the smoke siren and the CO siren. I have these First Alert Smoke/CO detectors hardwired to each other(Little side note, as I was testing the listener, I discovered our kitchen smoke detector was dead. I ran out to Costco to buy 9 of these to replace them all. They are insanely loud). I’m not sure if it can detect the difference between smoke and CO sirens for all detectors or just certain models. 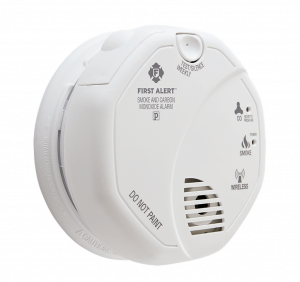 So I was not expecting anything more than the devices that I purchased in this bundle. However, after setting everything up, I noticed in the app that there were additional non-Ring devices that work with this system, and I actually already owned 2 of them. The first was a Z-Wave First Alert Smoke/CO Detector. The hardest part was actually removing it from Home-Assistant, but I was finally able to get it out of there, and it paired with Ring in less than a minute.  The only issue is that when I press the test button on the detector, the Ring Base doesn’t let me know anything. I know that the message gets sent, because I saw it when I had it on Home Assistant. The only way to test the Smoke/CO alarm’s communication with Ring is to actually start a fire. I’ve told customer service about it, so hopefully they fix that. 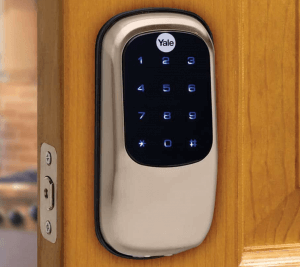 I also have a Yale YRD-240 lock. I had bought it a few years ago because I just wanted a lock for my garage with a keypad that didn’t have a keyhole. A six digit code is going to be way more secure than a key. Anyways, it came with a Z-Wave module that I never installed because I didn’t have a need for it, and it would just consume battery faster. Well now that I got this Ring system, I decided to try it out. It took a few minutes to pair because I think I was just going through the menu too fast. When I hit the last key, it would just generate an error tone and not even try to pair. When I did it slowly, it went through just fine. After it got paired, I was able to lock and unlock the door through the app. Alexa was also able to lock the door.

I only have it on the garage door, but I’m thinking about putting it on all the doors. It would be nice to just ask Alexa if the doors were locked instead of checking manually every night.

None of these were deal-breakers for me, but they are definitely things that I would like to improved upon.

Again, none of those are show stoppers for me since my list of gripes with the old system was much longer.

I started writing this post when I first bought the system about 10 days ago. I just finished up, and after using it, I’m really happy with it. I’m going to see if there’s any type of automation I can do through Alexa. I’ve read something about Alexa guard, which is supposed to have Ring integration. It’s supposed to be able to act as a glass break detector, but I can’t find any info on the integration. And I’m also going to try and get Home Assistant integration working. Of course I will make another post if I make any real progress with either of those. And as always, please post below if you have any comments or questions.

3 Replies to “Initial Thoughts on the Ring Alarm”