I was recently messing around with my Infrared Thermometer to make sure the air coming out of the heating vents was the right temperature. While doing that, I of course had to point it at random things throughout the house, when I finally got to the 3D printer, which was currently running. I figured that would be a good way to verify that the reading on the sensors was close to the IR thermometer. And it was close enough. The glass bed was reading a few degrees cooler, but I figured that was to be expected since the printer sensor is not on top of the glass where I was taking my reading.

Later that day, when I went to print something, as the printer warmed up, I decided to point the thermometer at the bed again. This time, the glass was much cooler than the sensor reading. It seemed to lag behind the sensor. Again, this wasn’t really much of a surprise. The glass is going to heat up after the sensor. But I decided to cancel that print, and do some ad hoc science work.

And just in case anyone else was wondering, the IR thermometer is indeed able to measure the temperature of the glass itself, and not what is behind the glass.

I let the printer cool down to room temp, and then I started heating the bed again to 70°C. This time, I measured the amount of time that it took between the printer sensor saying 70°C and the IR thermometer to get to about 67°C. I repeated that 3 times.

I know how much you all love graphs. Unfortunately, I don’t have any. It’s just 3 data points.

Well, I wanted to see if there was any way to speed up that lag time. So I purchased these thermal pads that are made for processors. I had to cut a sliver off since the bed is wider than one of the dimensions. You can see what I’m talking about in the picture below: 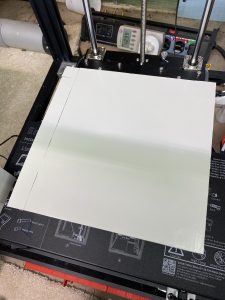 After that, I put the glass on there, and did my tests again.

The results were surprising. I honestly didn’t think it was going to make much of a difference, but it cut down that lag time in half. The 3 readings I got this time were 0:40, 0:44, and 0:42. That’s an average of 0:42. And the glass temperature was only about 10°C behind the printer’s sensor when it hit 70°C.

So it definitely makes a big difference in the temperature. However, I don’t really how much of a difference it will make with adhesion. I had a couple of minor adhesion issues with some small prints I was trying to do, and I didn’t have any after that, but that really could have been a number of things that were changed in my slicer settings.

I would imagine that any plastic that gets laid down within that first minute after the sensor hits the target time might suffer from adhesion issues. With this upgrade, that time where you might have issues gets knocked down a good bit. Luckily, it was less than $10, and I’m certain that it’s not causing any adverse issues.

In hindsight, I also should have measured the temperature of the bed without any sort of plate on it. I would do that now, but that thermal pad can be difficult to work with, and I doubt I’ll be able to take it off and put it back on without tearing it to shreds.

Let me know what you guys think. Especially if you have done something similar.