I wrote about the Nelly WiFi Doorbell a little over a year ago. At first, I was pretty happy with it. But after a while, it needed to be reset a couple time and it would need a reboot every couple of weeks. It was just a pain to look after it. It’s probably still one of the best options if you require local recording. In my case, I would love to have local recording, but not with this much hassle. I suspect that there’s a chance that the issues may have been the fact that the transformer was 10VA, and that it may have need a little more juice. But I couldn’t find any details as to what it required. I didn’t feel like experimenting with it, so I decided to go with the Ring Pro.

The Ring Pro, at the time of writing goes for about $200. There is also the Ring 2 which can optionally be wired or run on battery. And the original Ring which can only run on battery. Finally, there’s the Ring Elite. Which costs $500 and is way outside my budget. It has to be wired using power over ethernet. Your chances of signal loss go way down, but I just don’t know if that is worth 2.5x the cost. I’m guessing it might be helpful for high density environments where the WiFi frequencies are over saturated.

You can also get a plan that stores your videos for 60 days for $3 a month per device. Or you can pay $10 a month($100/year) for unlimited devices and alarm monitoring with the Ring Alarm. I purchased the Alarm a while back for the cheap monitoring(I wrote about it here), so I already have the unlimited devices plan. Already having that plan was one of the reasons I purchased this doorbell. The free plan only alerts you when someone rings the doorbell or it detects motion, and you can view the live feed. However, there is no recording at all. If you don’t want to pay monthly and you want to be able to review recorded video, then this is not the doorbell for you. Another nice thing about the unlimited devices plan is that they will replace your devices for as long as you have the plan, even after the 1 year warranty is done.

I would guess that nearly everyone will need to replace their transformer. The Ring Pro requires a 16-24v transformer. It needs to be able to push 20VA if you don’t have any chime hooked up, and 30VA if you do. My transformer was only 10VA, so I had to replace it. I purchased this transformer off of Amazon. Ring also sells a transformer on their site for $10 more.  I’m sure it would probably work fine, but the one on Amazon is well reviewed.

You may have trouble finding your transformer. I know I did when I was installing the Nelly. If you are having trouble, I suggest you read that post. I listed a bunch of places where that thing is commonly hidden.

Installing it was easy. Make sure to turn the power off to that circuit before doing this. Mine was behind the chime, so I just remove the cover and unscrewed the chime to access it. There are 3 wires for the high voltage: common, neutral, and ground. Just remove the old wires and connect the new transformer the same way. Here’s a picture for reference: 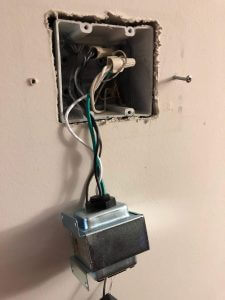 Next, just push the transformer into the electrical box and connect the chime’s 2 wires. Be sure nothing is getting shorted. This can sometimes happen if the ground wires are touching one of the leads. 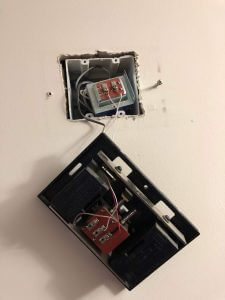 Next, I put the chime back on. And then I installed the ‘Pro Power’ module. I’m not sure how the inner workings of this device operate, but it says that it ensures the doorbell gets the power it needs. It just connects to the 2 leads on the chime that connect to the doorbell. Polarity doesn’t seem to matter. After connecting the wires, just peel the backing off the sticker on the ‘Pro Power’ module and stick it to the side of the chime and put the cover back on. 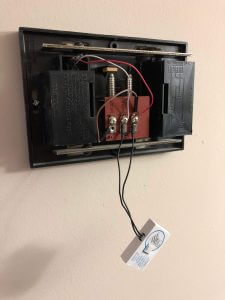 Now it’s time to install the doorbell. Just remove the old one first. Then, if needed, put on the horizontal or vertical angled brackets, or both. There are needed if you want to adjust the angle the doorbell is facing. I used the horizontal bracket because otherwise, I would just capture more of the wall next to the doorbell. If you don’t need any, then you can just screw the doorbell directly on. It comes with different sized screws depending on how many brackets you use. After the brackets, connect the wires and screw in the doorbell. Once it’s mounted, just put the cover on and put in the security screw. Make sure you keep that screwdriver bit in case you need to get in there in the future. 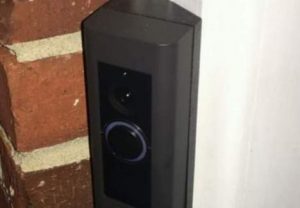 After installing it, setup is as easy as most other smart devices. Just go into the Ring app, and then ‘Set Up a Device’. Tap ‘Doorbell’, and then just follow the instructions to add it and connect it to WiFi.

After you complete the setup, you can configure the settings on the doorbell by tapping on the doorbell and then tapping the gear icon at the top right. The Color Night Vision under Video Settings is nice. The picture appears to look better at night with it enabled. But the main settings you will want to adjust are under ‘Motion Settings’. I personally set the sensitivity to the max, but I also don’t have it sending me alerts for all motion. Another thing you will want to adjust are the motion zones. This where you would specify the areas of the screen that look for motion. This was useful for me since I had trees in the picture that would trigger the motion alerts.

If you have Echo devices throughout the house, you probably don’t need to purchase any of the Chimes. You can easily create a routine through the Alexa app that will announce a phrase of your choosing whenever someone rings the doorbell. It just takes a minute to set it up. I was going to get a chime, but this worked out well. The Echo Dots also cost the same as the Chime as well.

So far, I’ve been happy with the doorbell. Unlike the Nelly, I have gone over a month without having to mess with the doorbell to keep it running properly. And considering the fact that 60 days of recording was already included with the Ring Protect Plus plan I already had, I think this was by far the best option price-wise.

As always, just comment below if you have any questions or suggestions. I usually reply within a day or 2.